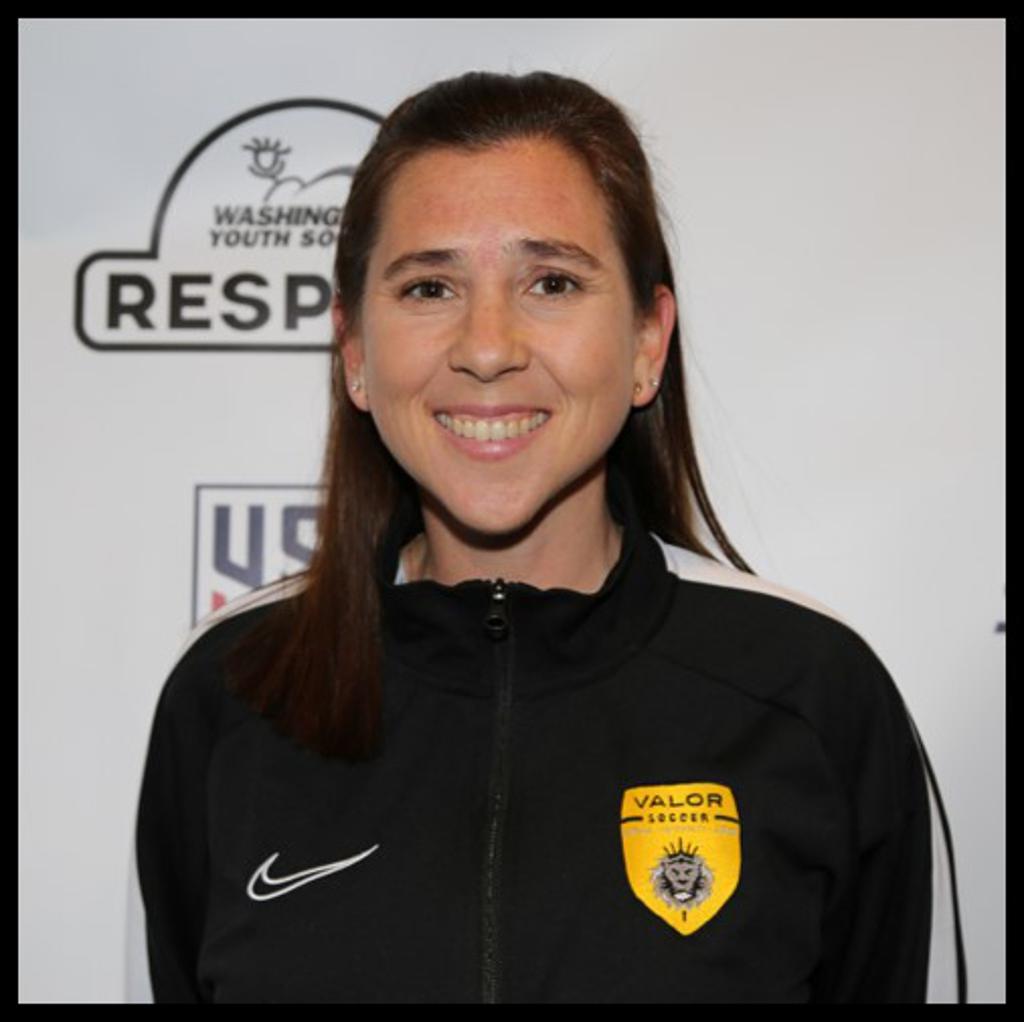 Debra Bailey grew up in southern California, playing soccer since the age of five. Coach Debra played Premier soccer for the Corinthian Futbal Club through high school. She continued to play soccer recreationally during college and graduate school while she studied to become a dentist.

After her graduation from dental school, Coach Debra reconnected with a fellow Premier soccer player from her youth, her now-husband and fellow Valor coach, Coach Jon Bailey. After getting married, Coach Debra and Coach Jon moved to the Puget Sound area to begin their family.

Coach Debra started her coaching career at Maple Valley Soccer Association, coaching her children’s teams as they progressed through the club’s Mod, Rec, and Premier programs. Coach Debra loves the enthusiasm and energy kids bring to the sport when they are having fun. She finds it rewarding to watch her players learn and improve over time while they learn important life lessons such as self-confidence and teamwork. Some of her favorite coaching moments include watching her players scoring for first time and rising above their fears to play a new position - especially goalkeeper!

Coach Debra holds a USSF Grassroots License and is working toward her USSF D License. 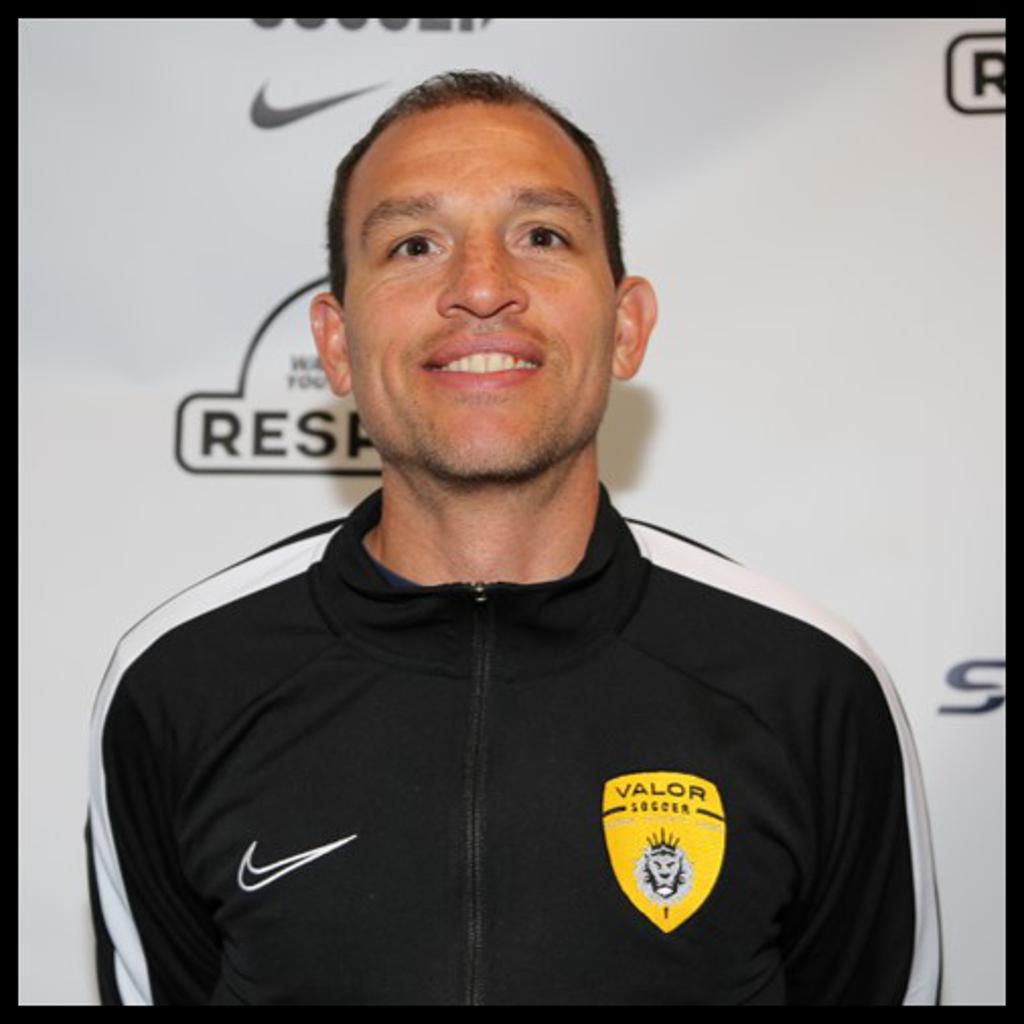 A native of Redding, CA, Jon Bailey was a high school all-star, Southwest Region ODP recruit, and the #1 ranked player in Southern California. Coach Jon played club soccer with the San Bernardino Corinthians, leading his team to win the Surf Cup. He then played college soccer at Azusa Pacific University and the University of Redlands. During college, Coach Jon was a three-year captain, three-year MVP, and two-year first team All-SCIAC and All-American honoree.

After college, Coach Jon went on to play semi-professionally with Salzburg Casino in Austria and the Emperors out of Redlands, CA.

After moving to the Puget Sound in 2000, Coach Jon set up roots in Maple Valley, where he began volunteering his time to coach his children, who both play in the Valor Soccer program. 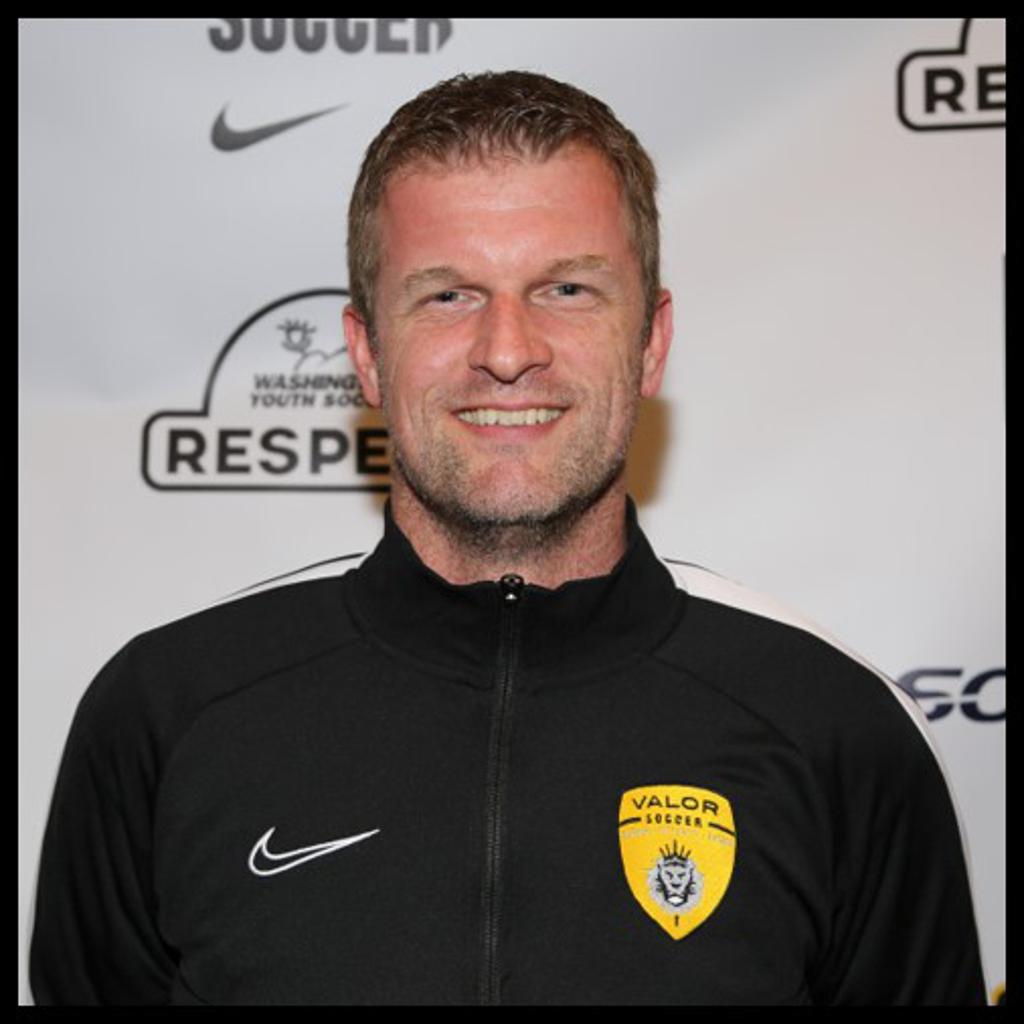 Coach Chris has coached for Kent Covington Youth Soccer’s Mod, Recreational, and Select programs for the last 11 years. Coach Chris focuses his coaching tactics on skill development, refinement, and quick and clean gameplay. He encourages his players to push themselves and their teammates to better the team as a whole.

Coach Chris is working toward his USSF Grassroots License. 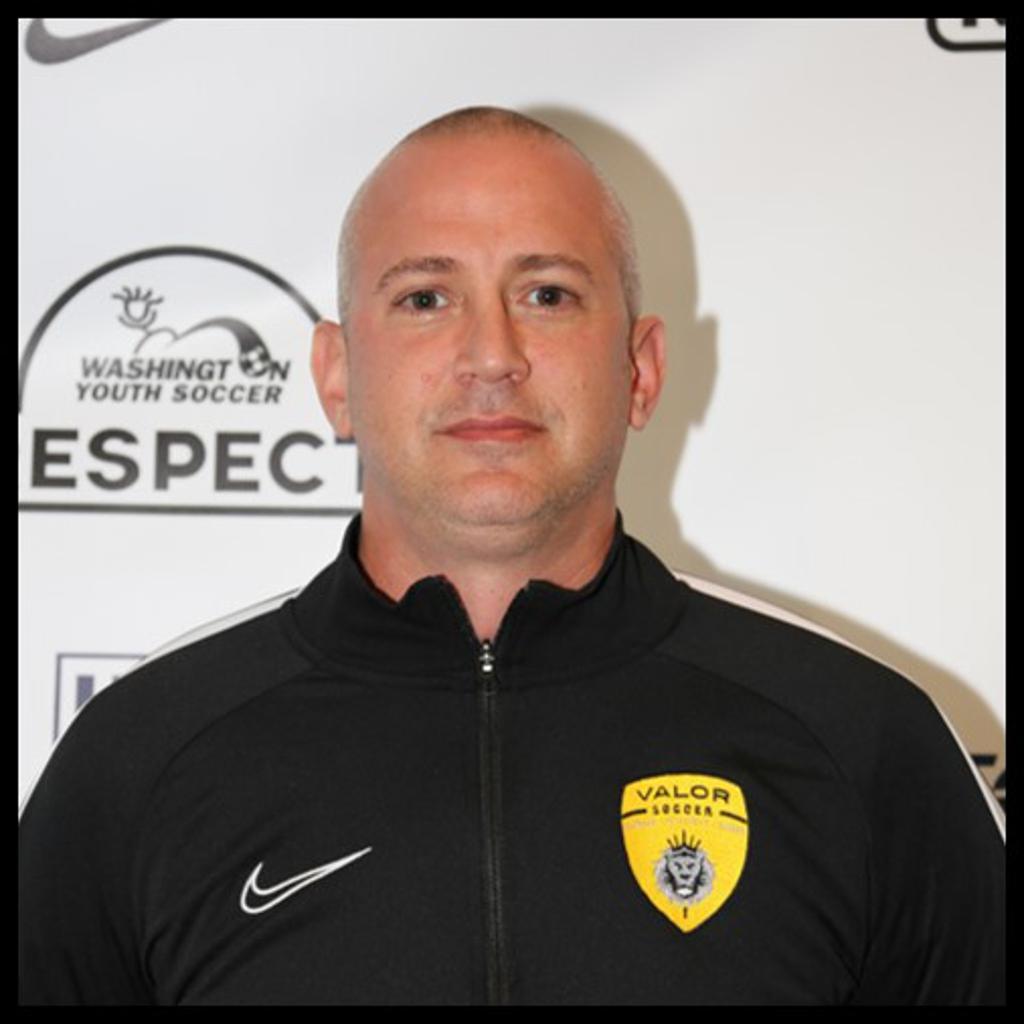 A native of Valparaiso, Indiana, Dusan Cekarmis played his formative soccer years in Spring, Texas. Coach Dusan played varsity soccer in high school before going on to play five years of Premier soccer with Texans SC. Upon completing his active duty service in the U.S. Army, which included a tour in Iraq, Dusan moved to Covington, WA.

Coach Dusan has taken his love of the game and moved it to coaching. He has worked with several youth soccer organizations including Sumner FC, Covington Parks and Rec, and Kent United. 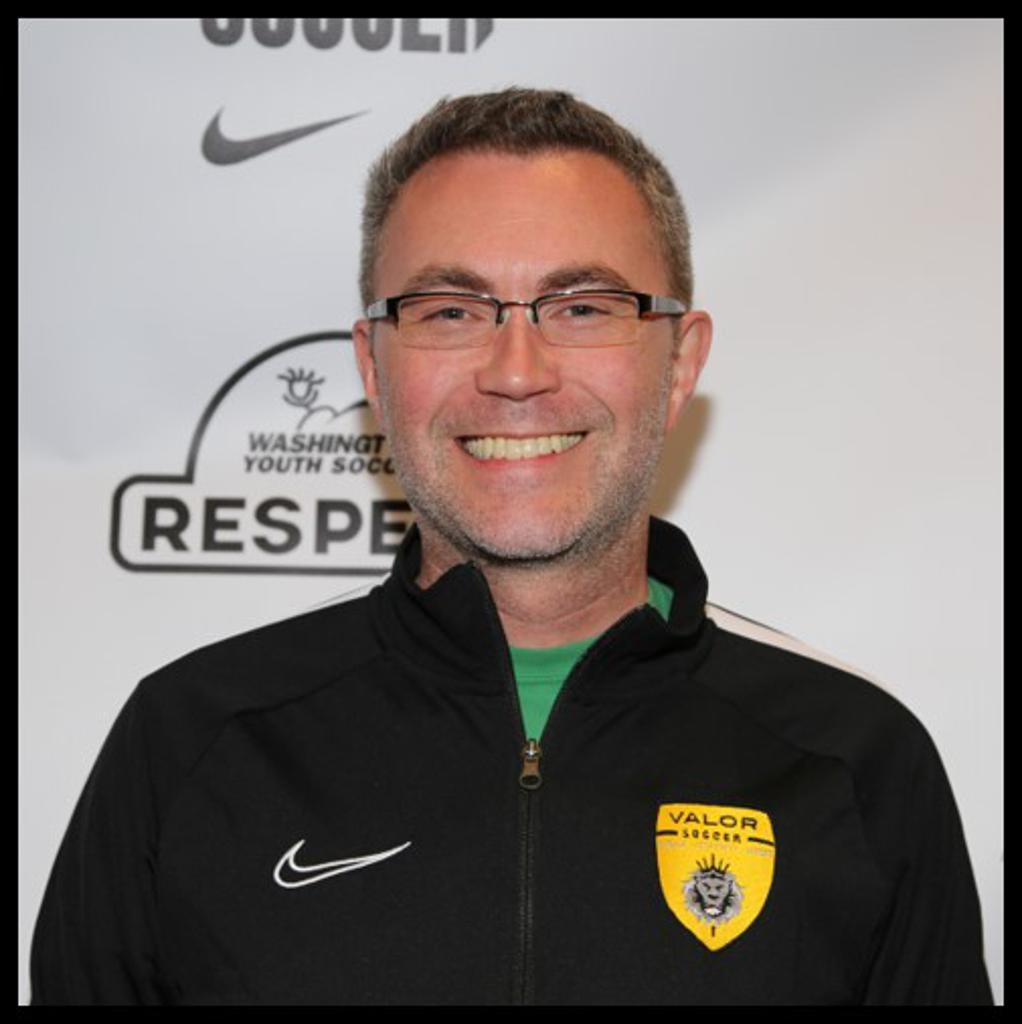 Scott Erickson was raised in the greater Seatter area. He attended Issaquah High School for high school and the University of Washington for college. Growing up, Coach Scott tried his hand at many sports including recreational soccer, track and field, football, skiing, and rowing.

Coach Scott has coached for Kent Covington Youth Soccer’s Recreational and Select programs for the past ten years. He loves coaching in the Select program because it gives young athletes the flexibility to experience multiple activities and sports. Coach Scott aims to create a fun and focused training atmosphere that promotes both individual and team development. 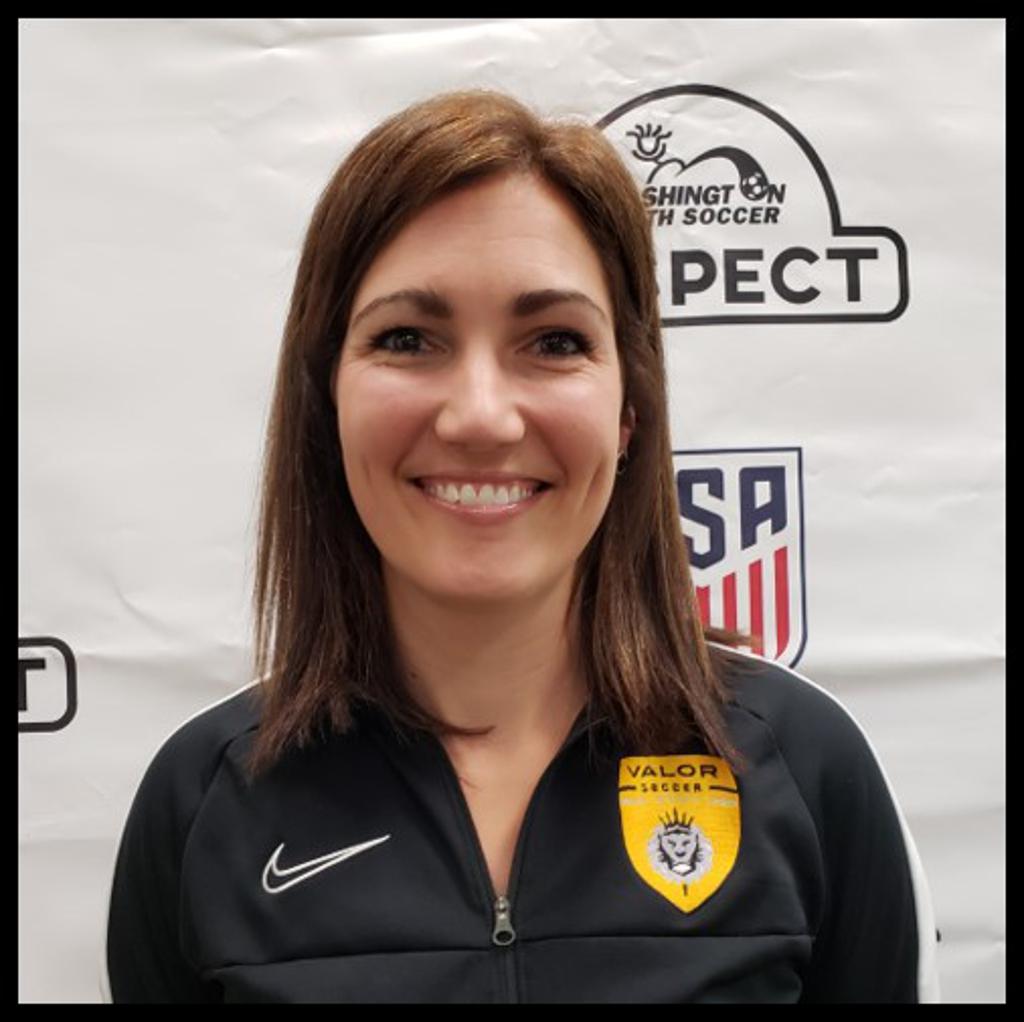 Born and raised in Washington state, LaNiece Fenton began playing soccer at the age of six. She played recreational and Select soccer through elementary and middle school before joining the Highline Soccer Association Premier Eagles in high school. Coach LaNiece additionally played four years of varsity soccer at Mount Rainier High School in Des Moines, WA. She experienced great success with both her club and high school teams, leading them to multiple finals and semifinals, including winning the WA State Championship Cup in 1999. In college, Coach LaNiece played soccer for the University of Portland’s club team. She continues to play recreationally alongside her husband on their co-ed team.

Coach LaNiece began coaching while still in high school, assistant coaching and refereeing for Tukwila Soccer Club. In 2010, she began assistant coaching for the Mercer Island High School Girls soccer program. She then began coaching her own kids in the Kirkland Pee Wee Soccer League and Maple Valley Soccer Association’s Mod program. Coach LaNiece teaches her players believe in themselves and work together as a team. She loves to see her players grow as athletes and as people from the skills and lessons they learn from soccer. 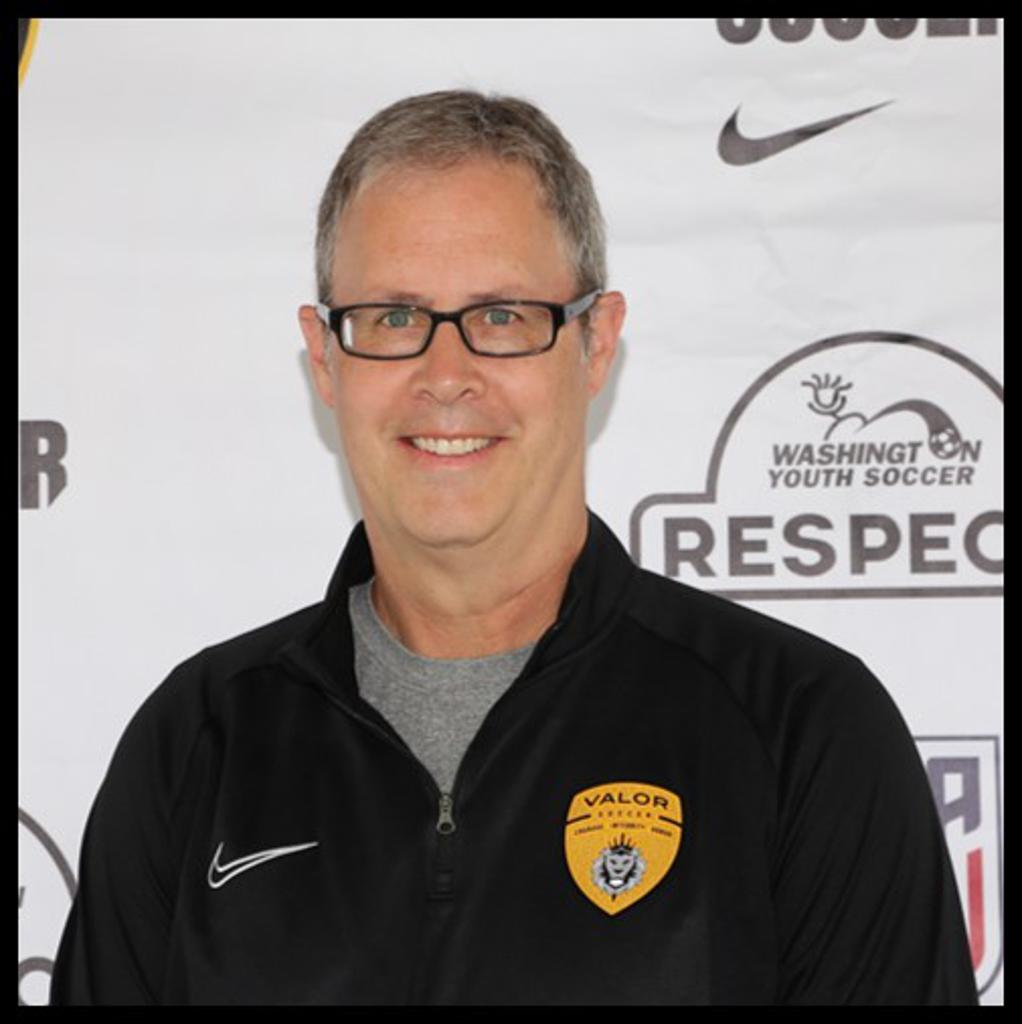 Born and raised in Woodbury, Minnesota, Jeff Fleming played soccer in his hometown through his high school years.

After moving to the Pacific Northwest for a new job, Coach Jeff began coaching for Kent Covington Youth Soccer. He has coached for the club’s Mod, Academy, and Select programs for both boys and girls teams. Coach Jeff believes building team chemistry is the key to a successful team. He encourages his players to work hard, have fun, and grow from their game and tournament results throughout the season.

Coach Jeff holds a USSF Grassroots License and is working toward a USSF D License. 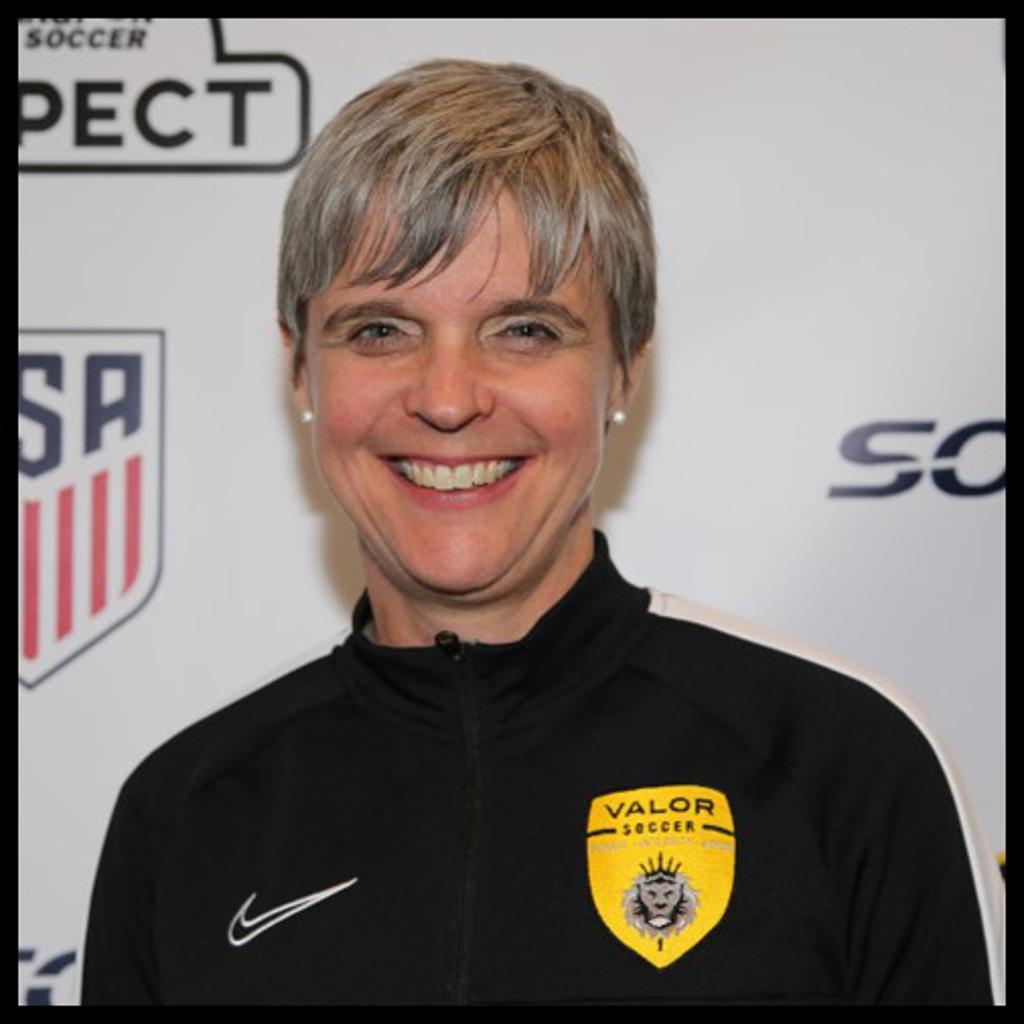 Raised in Renton, WA, Kim Hamell grew up playing recreational soccer in the local area, calling Pea Patch Fields and Kent Commons her home turf. After attending college, Coach Kim moved back to the area to teach elementary school and raise her family.

An active member of the community, Coach Kim became involved with youth soccer through Kent Covington Youth Soccer. She has coached for both the club’s Mod and Select programs, teaching her players the value of hard work, instilling them with confidence on and off the field, and passing on her love for the game of soccer. 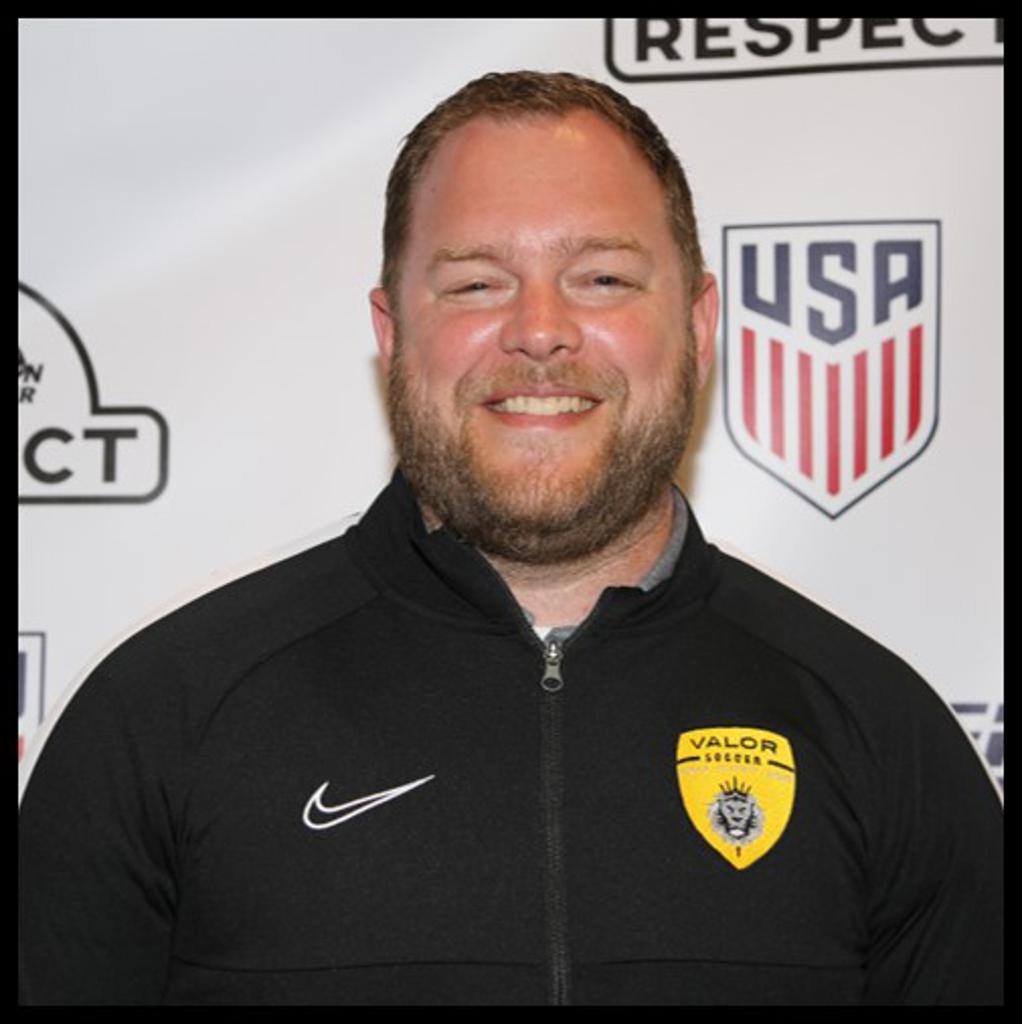 Art King grew up playing soccer in California and Oregon. He played with the West Linn Soccer Club as kid and continued his love of the game through college, playing recreationally at Oregon State University.

Coach Art’s successful career on the sidelines coaching both his sons' teams took him from coaching Recreational teams to being named the Director of the Mod Program at Kent Convington Youth Soccer.  Eventually he was elected to the role of President of the KCYS Association. Recognizing the changing landscape of youth soccer, Coach Art played an integral role in partnering with Maple Valley Soccer Association to form Valor Soccer. His hard work and dedication have helped open paths for all players to participate in the game of soccer.

Art has had a tremendous role in the soccer community beyond our association.  He is also the Board President for the South Sound United League, which is the league that our recreational teams play in along with 200+ Rec teams from South King and Pierce counties. 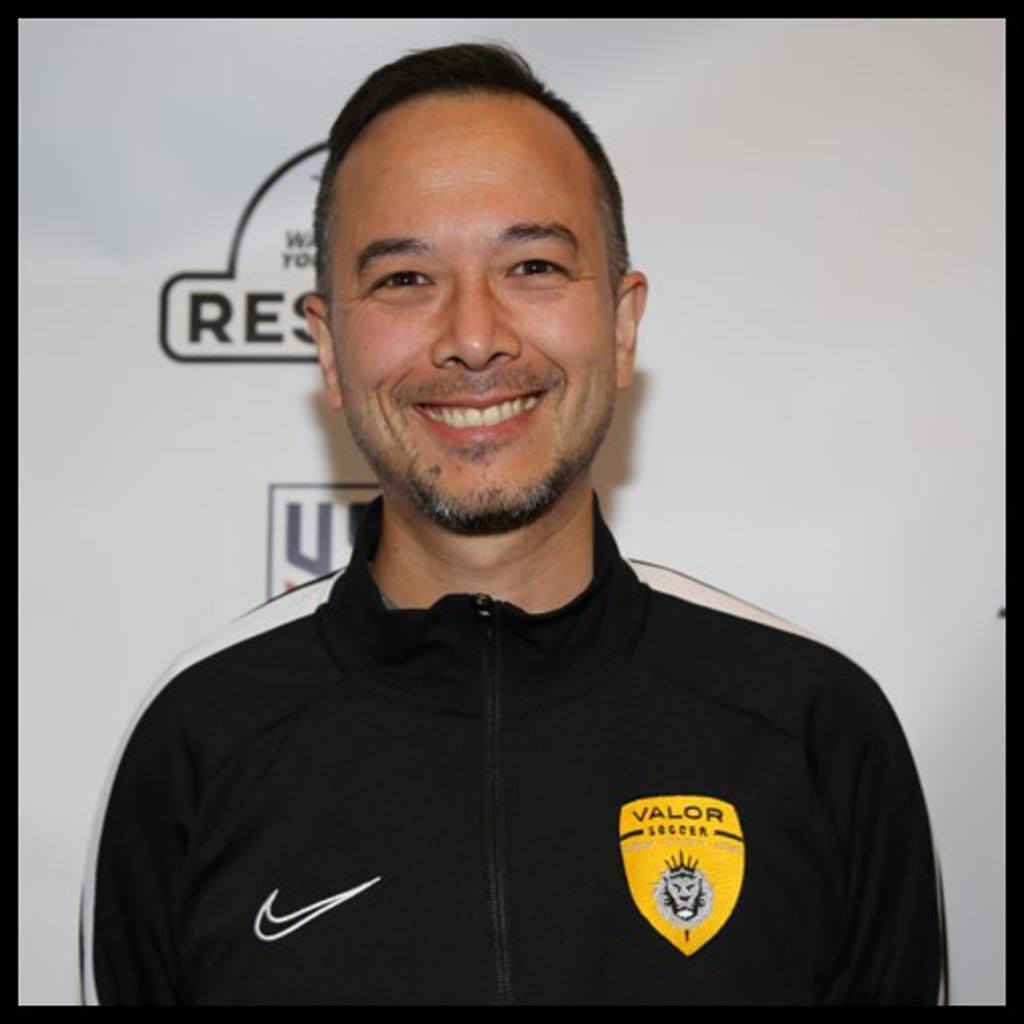 Raised in Kent, WA, Erik Lee grew up playing soccer for Kent Covington Youth Soccer in the club’s Recreational and Select programs. He continued to play soccer recreationally during and after college.

After serving as an assistant coach for Kent United, Coach Erik is excited to take on the role of a head coach at Valor. Coach Erik loves teaching his players about the technical and tactical aspects of the game. He encourages them to add their own creativity to the skills they learn at practice. 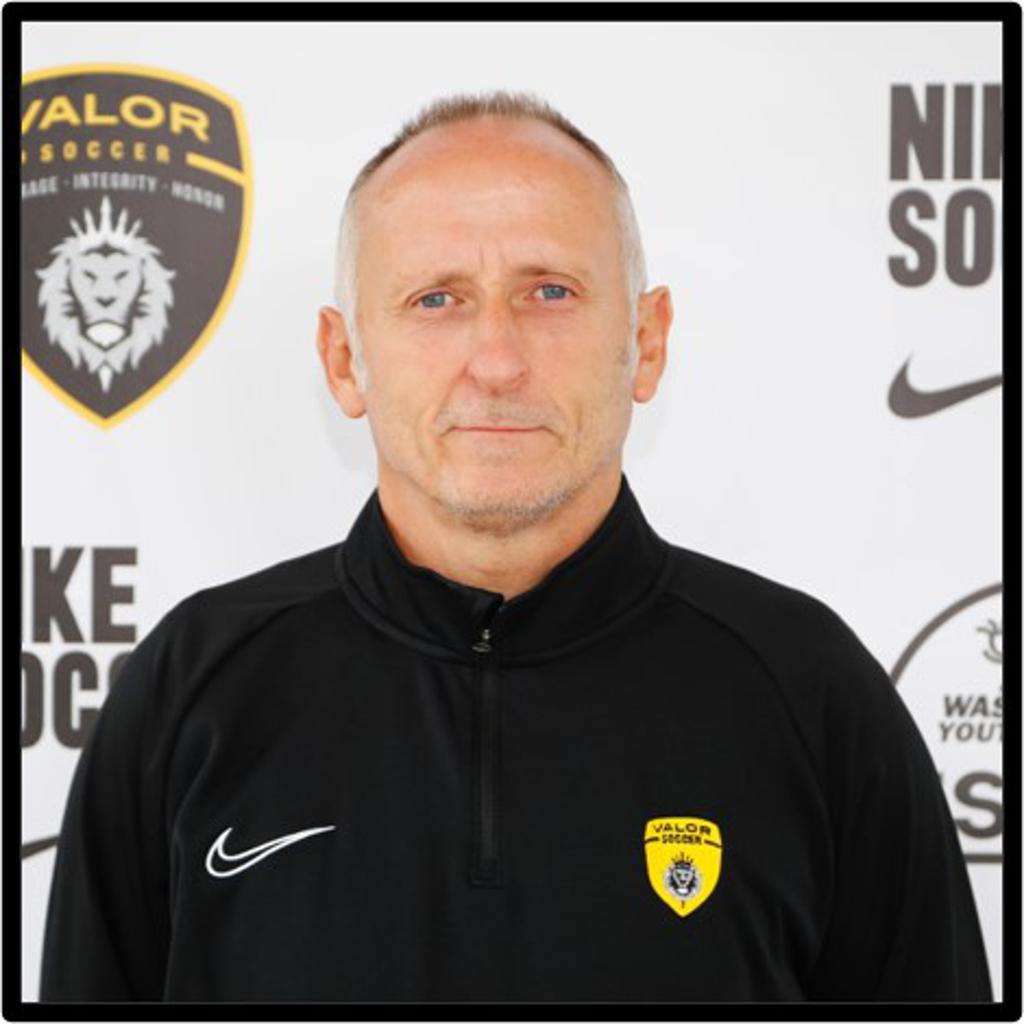 Paul McIlvenny was born in Warwickshire and raised in Hampshire, England. He played youth soccer until age 14 when began playing in men’s leagues. Coach Paul joined his hometown club, Basingstoke Town FC, at 17 years old. He then went on to play at several amateur clubs, including Whitchurch United and Alresford Town FC. While recovering from an injury, he started coaching at his clubs. Coach Paul continued his playing career upon moving to the U.S., joining the Peruvian side Sport Boys in the San Francisco Major League. 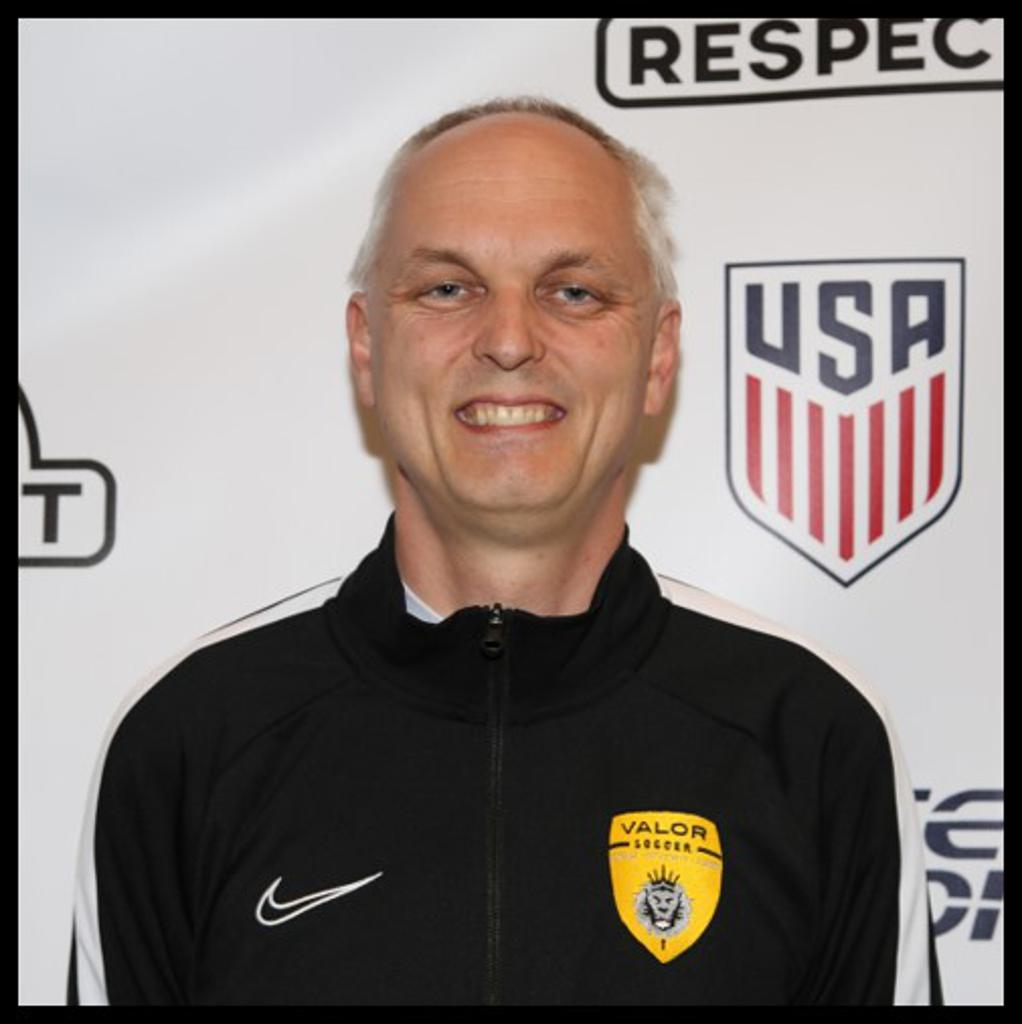 Raised in Issaquah, WA, Bill Morency grew up loving any sport he could play. Prior to having kids of his own, Coach Bill spent years volunteering as a coach for multiple sports, including baseball, softball, volleyball, and basketball, for the Covington Community Center and City of Maple Valley.

For the last seven years, Coach Bill has coached for Maple Valley Soccer Association, Kent Covington Youth Soccer, and Arena Sports. He has had great success with his Boys 07 team at KCYS, assisting them on their journey to two NPSL Division 1 Championships and runner-up at the 2019 Washington State Founders Cup.

Coach Bill loves working with kids and seeing them have fun and learn new skills. He may not have started life in the soccer world, but he continues to demonstrate his love for the game and the players in his coaching pursuits.

Coach Bill holds a USSF D License and is preparing to start work on his C License. He additionally holds a 9v9 diploma from NSCAA and a Grade 8 Referee certification. 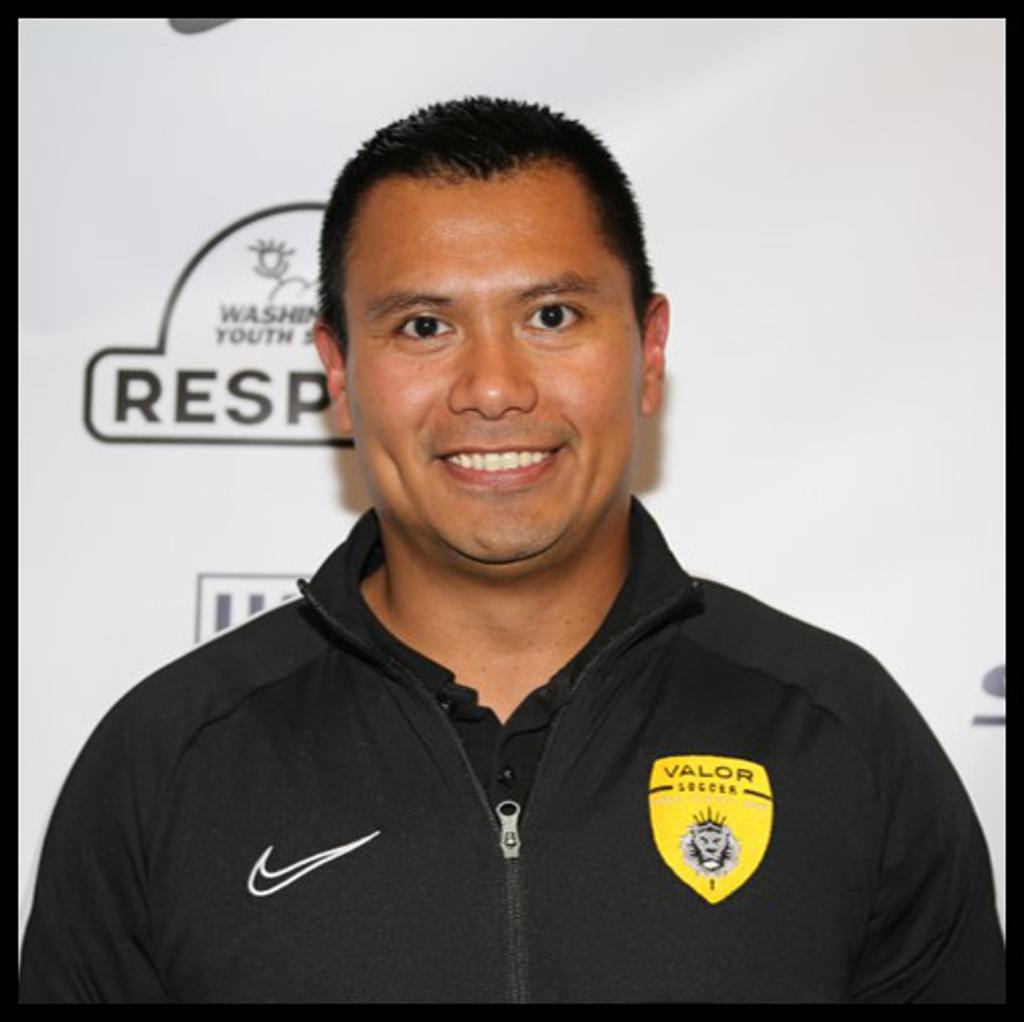 Richard Natividad grew up in Oswego, Illinois, where he was a multi-sport athlete in his youth, playing soccer, football, and pole-vaulting. Coach Richard moved to Washington state to attend college at the University of Washington. While in college, Coach Richard played intramural soccer where his passion and love for the game flourished.

Coach Richard began his coaching career at Kent Covington Youth Soccer, coaching for the Mod program. He then moved on to coach for the United Academy in preparation to join Kent United’s Select program staff. As a coach, Coach Richard loves watching his players develop their passion for soccer, competition, and the success that teamwork brings. 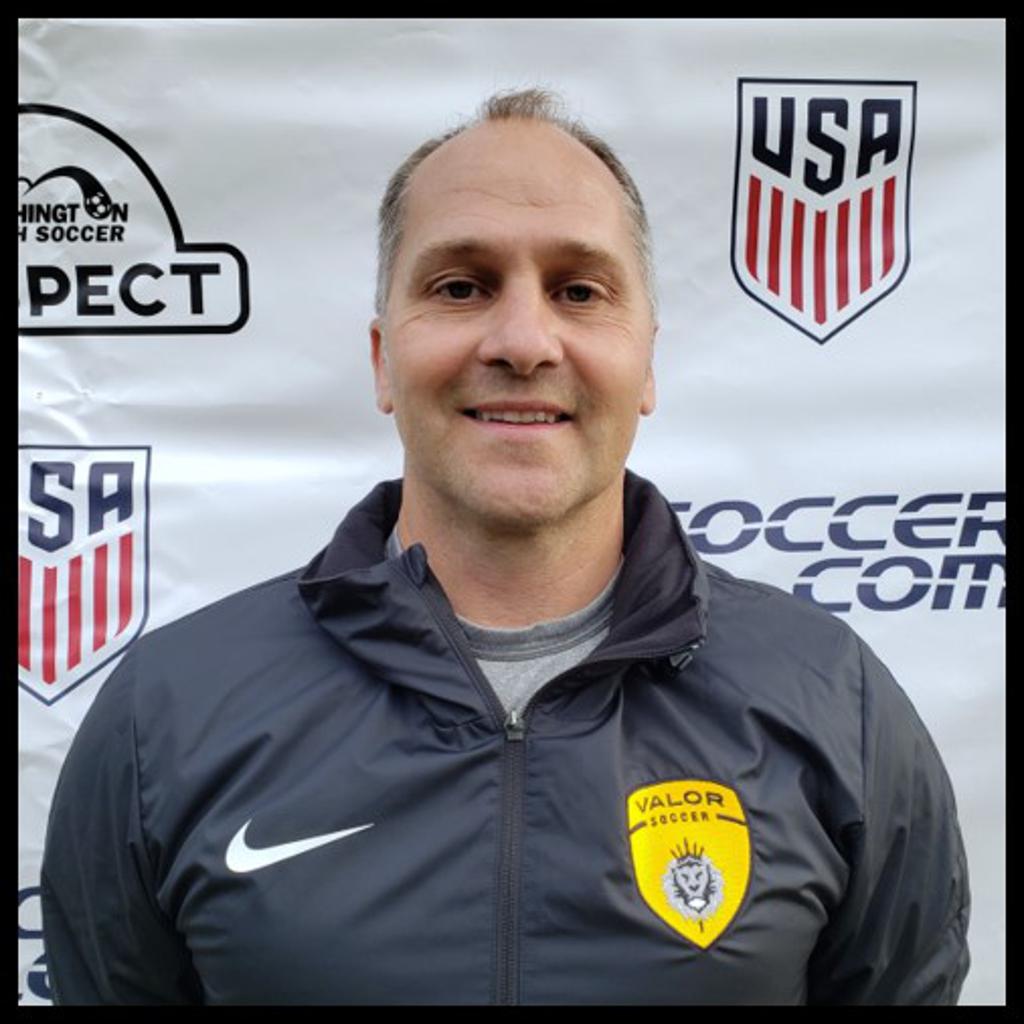 Coach Brett’s coaching career began twelve years ago at Kent Covington Youth Soccer. He has experienced success coaching both girls and boys teams at the Select level. Coach Brett focuses on possession style of play with balanced pressure. He strives to create a learning environment where players are challenged and encouraged to reach their full potential as individuals and as teammates. 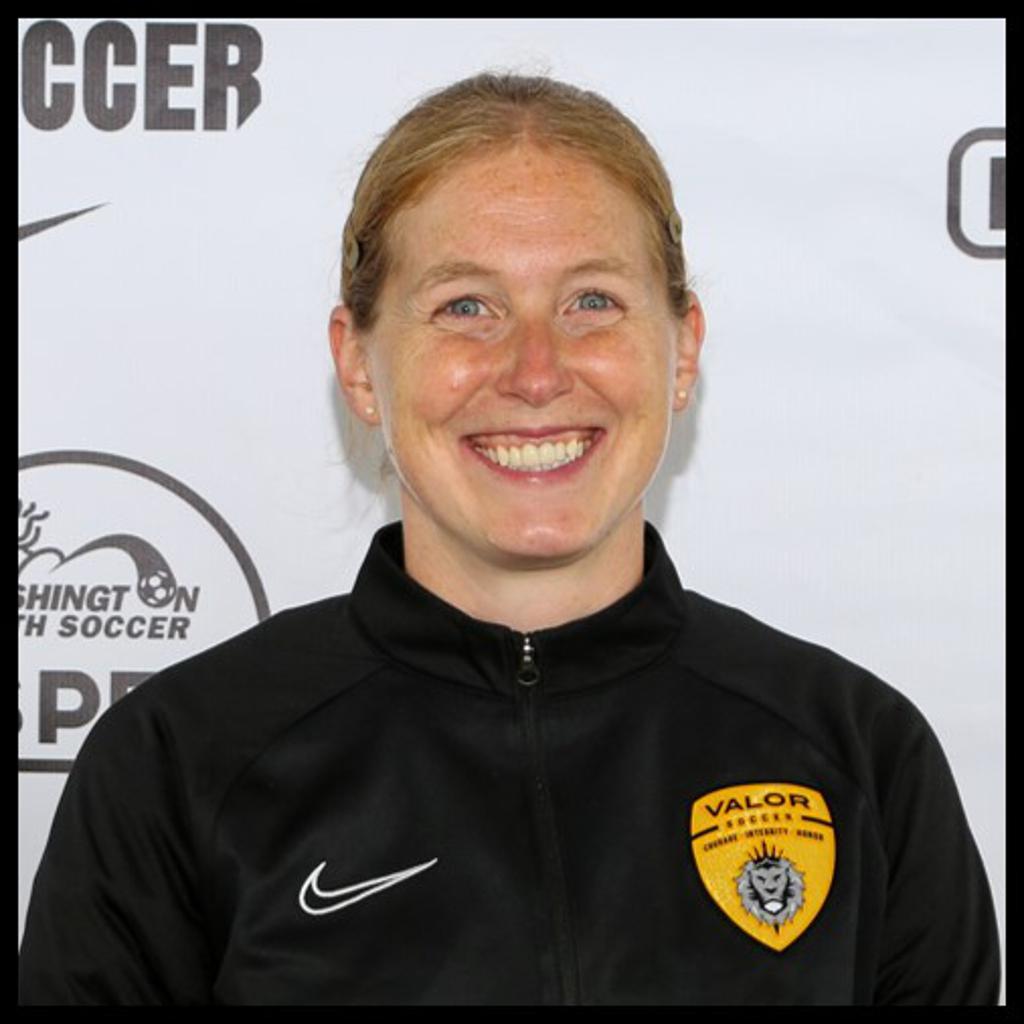 Jacqueline Rigtrup was raised in Maple Valley, WA. She grew up playing many different sports during her childhood. Coach Jacqueline attended Tahoma High School, where she was a four-year letterman in soccer, basketball, and fastpitch softball. At Tahoma High School, Coach Jacquline was honored as Athlete of the Year, and she was additionally recognized as Prep Athlete of the Year by the Seattle Times and the South County Journal. She went on to play NCAA Division 1 basketball at Eastern Washington University, making the Big Sky Conference All-Academic team in 2000, 2001, 2002, and 2003 while earning her Bachelor of Science degree in Computer Science.

Coach Jacqueline has coached recreational soccer and basketball for the City of Covington for the past six years. In 2017, the City of Covington honored Coach Jacqueline with the Coaches Sportsmanship Award. She focuses her coaching on demonstrating the benefits of teamwork to her players. As a coach, her main goal is to provide her players with a positive and safe training environment where everyone can improve while having fun. 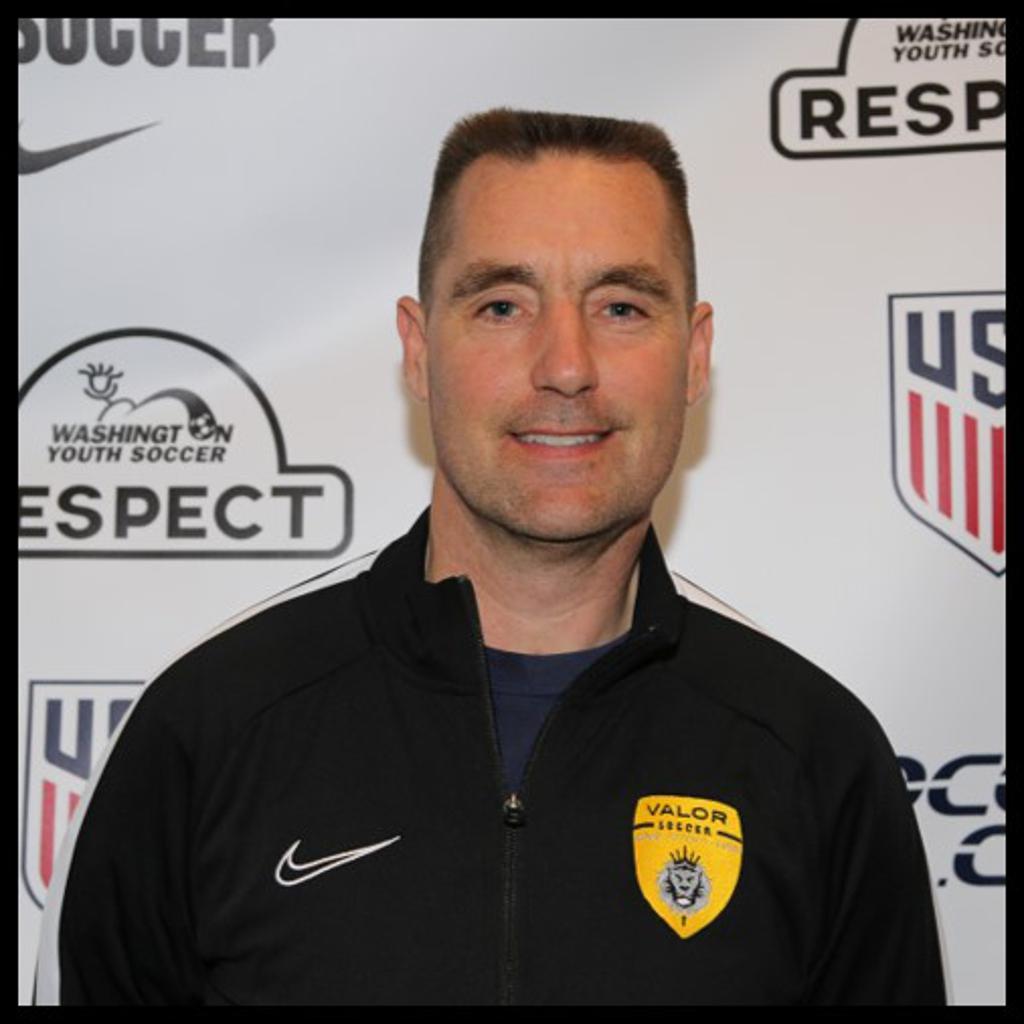 David Salter grew up in West Seattle and began playing goalkeeper at the age of 11 for his youth team. Coach David continued to play soccer through his high school years. He then joined the Marine Corps and served his country for eight years, including a deployment to Saudi Arabia during Operation Desert Storm. Following his military service, Coach David resumed playing soccer in Seattle, playing in recreational adult leagues.

Coach David strives to create a family atmosphere with his teams. To him, there is no better feeling than teaching a skill and then watching a child's excitement when they succeed. The lessons Coach David teaches on the field are also lessons his players can use off the field. In Coach David's words, "Positive coaching results in positive play and positive players."

Coach David is working toward becoming a licensed coach. 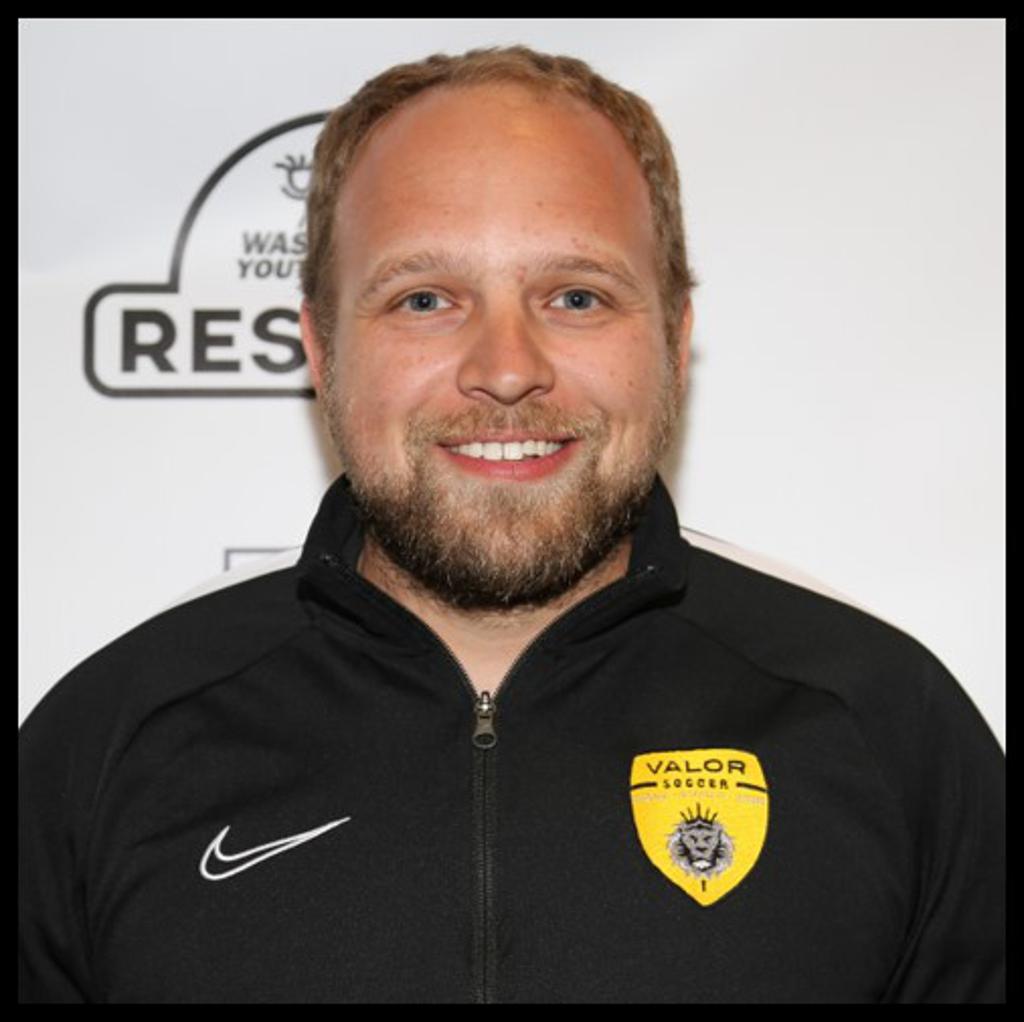 Coach Mark’s passion for the game and his natural ability as a coach have led him to pursue his USSF Grassroots License.